Setting up gigabit internet at home

I made it guys. I really did it. I can now download and upload approximately 125 MB worth of data every second or, put another way, 1000 Mbps. Goodbye to all of the streaming and gaming lag - I am very stoked!

To put things in perspective, this is what I can theoretically do with this kind of internet. I can download:

So how did I get there?

Well, for starters, I recently moved. I’m still in Seattle, not too far away from the old place. Besides a million other things, moving entails canceling your old internet service and looking for a new ISP at your new place. Even though I didn’t really take this into account when leasing this new place, I was pleasantly surprised to hear that they had the Google Fiber service in the new building. It’s really not that common - not even in Seattle. It was all setup in the building - it was just a matter of them enabling my unit in the conn room or whatever they have down in the lobby. Anyways, once I activated my service, I realized that my old JCG-150 router from college wasn’t ready for this task so I started researching for routers. It’s important to note that at this point I had about ~120mbps service because my old router couldn’t handle the gigabit internet.

Also a quick note about the cost. It’s technically $60 a month but if you pay upfront for a year, it’s only about $600 for the first customers. I think, given the reliable speed I’m experiencing, this is well worth it. But.. I’m getting ahead of myself. Initially, I had some other problems.

In the new place, I have an extra room where I setup my office so unlike the old place, the router wasn’t going to let my laptop, my TV, and my playstation connect over the wire since they were going to be in two distant spots in the apartment. Slowly, my requirements were shaping up. I needed to work with the network patch panel at the entrance and enable a few of those ethernet ports that were going into my den/office, the living room, and the bedroom. Because the TV and the playstation were going to be right by the same ethernet port, I also needed at least one switch along with a new router.

The google fiber guy told me that I needed a switch if I wanted to enable all the ports in the house. Basically, his idea was to connect the uplink to the switch and then connect the eth cables to the outgoing room ports. Here’s the picture that he was thinking about. 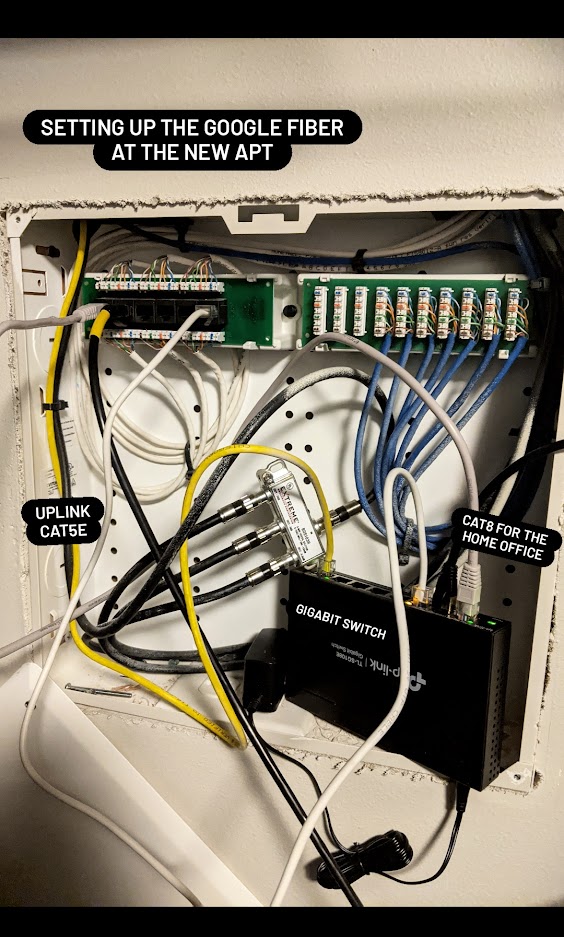 I definitely did try this setup but ultimately it failed. A couple of reasons why this setup wasn’t right:

I ended up configuring my home network as follows: 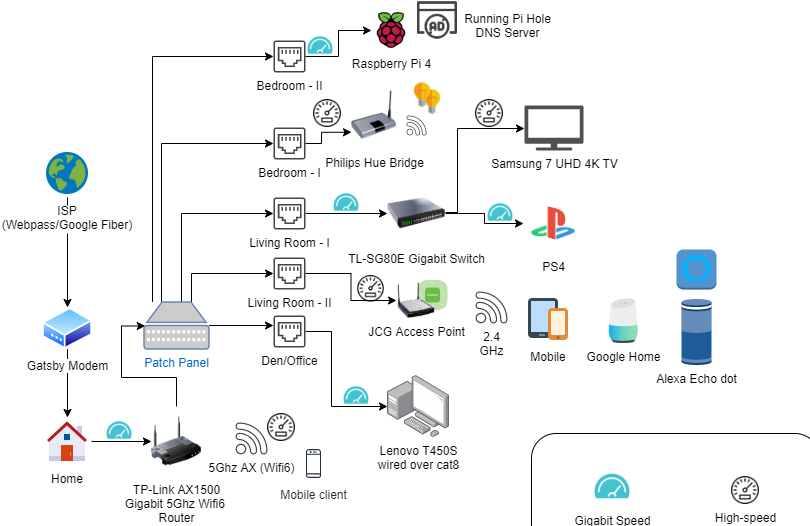 I would summarize the decisions that went into this architecture as follows:

Hope this was helpful to someone out there. Let me know if you have any questions about the setup.

Signed up for a gigabit @googlefiber at my new place and even got a few cat8 cables for the switch. This is already a huge jump from my old setup but I still wonder why the download speed is ~30% less than the upload 🙃 pic.twitter.com/u85bTX2OrC